James Carpenter was born and raised in a working class family in rural Mercer County, Pennsylvania, the oldest of four brothers. He made his way through college working variously as a farmhand, stock boy, short order cook, machinist, truck driver, soda jerk, janitor, switchboard operator, telemarketer, dishwasher, babysitter, day laborer, and foundry worker. After college, he taught middle and high school English until he retrained as a technologist and worked various jobs as a technical writer, computer programmer, and manager. Along with two partners he founded, developed, and sold a company that developed and marketed voter registration software, after which he worked for many years as an independent software consultant, specializing in developing software and systems for technology startups.

He developed the Erica T. Carter software system that composed the poetry anthologized in the Issue 1 dustup. Erica’s poetry also found its way into a couple of dozen literary journals. He presented Erica at several conferences, including at the University of Pennsylvania, Brown University, and the e-poetry 2007 conference in Paris. He has collaborated and shown artwork with his daughter, J Carpenter.

He spent fourteen years as a member of the affiliated faculty of The Wharton School where he lectured in computer programming, system design, and entrepreneurship before retiring to write fiction. In addition to his novel, No Place to Pray, his writing has appeared in numerous publications including The Chicago Tribune, Fiction International, Fifth Wednesday Journal, North Dakota Quarterly, and Ambit.

He lives in the New Jersey Pine Barrens with his wife Rosetta. 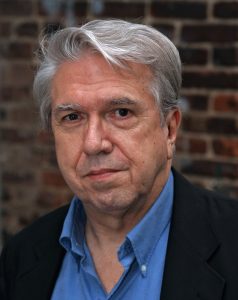